This surprising result comes from an analysis performed by Maosheng Xiang and Hans-Walter Rix, from the Max-Planck Institute for Astronomy, Heidelberg, Germany. They took brightness and positional data from Gaia’s Early Data Release 3 (EDR3) dataset and combined it with measurements of the stars’ chemical compositions, as given by data from China’s Large Sky Area Multi-Object Fiber Spectroscopic Telescope (LAMOST) for roughly 250,000 stars to derive their ages. 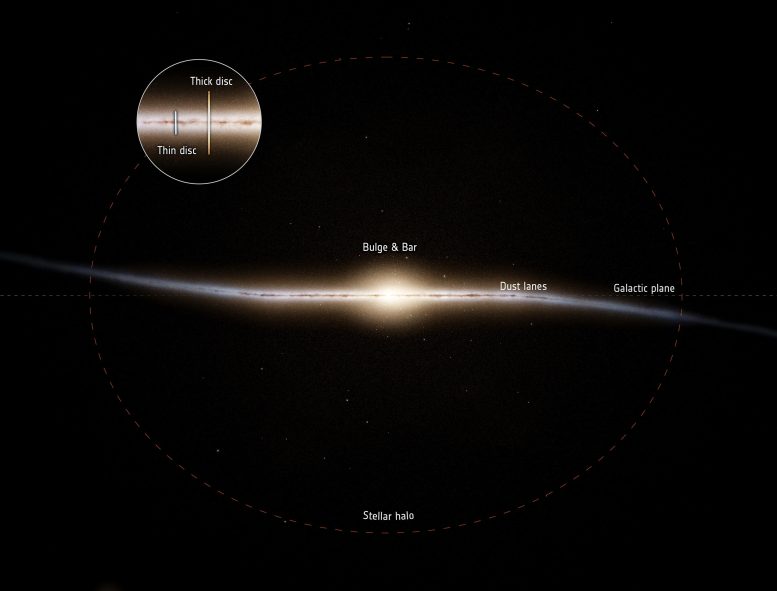 Basic structure of our home galaxy, edge-on view. The new results from ESA’s Gaia mission provide for a reconstruction of the history of the Milky Way, in particular of the evolution of the so-called thick disc. Credit: Stefan Payne-Wardenaar / MPIA

They chose to look at sub giant stars. In these stars, energy has stopped being generated in the star’s core and has moved into a shell around the core. The star itself is transforming into a red giant star. Because the sub giant phase is a relatively brief evolutionary phase in a star’s life, it permits its age to be determined with great accuracy, but it’s still a tricky calculation.

How old are the stars?

The age of a star is one of the most difficult parameters to determine. It cannot be measured directly but must be inferred by comparing a star’s characteristics with computer models of stellar evolution. The compositional data helps with this. The Universe was born with almost exclusively hydrogen and helium. The other chemical elements, known collectively as metals to astronomers, are made inside stars, and exploded back into space at the end of a star’s life, where they can be incorporated into the next generation of stars. So, older stars have fewer metals and are said to have lower metallicity. 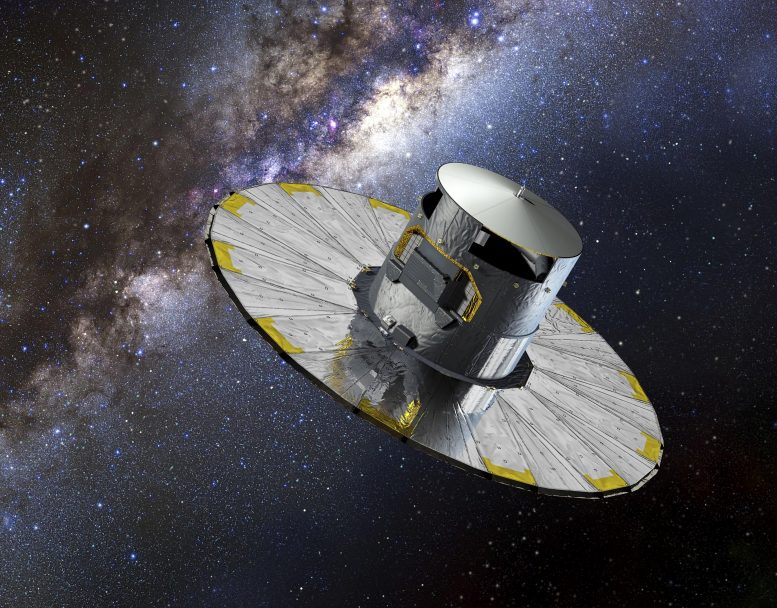 The LAMOST data gives the metallicity. Together, the brightness and metallicity allow astronomers to extract the star’s age from the computer models. Before Gaia, astronomers were routinely working with uncertainties of 20-40 percent, which could result in the determined ages being imprecise by a billion years or more.

Gaia’s EDR3 data release changes this. “With Gaia’s brightness data, we are able to determine the age of a sub giant star to a few percent,” says Maosheng. Armed with precise ages for a quarter of a million sub giant stars spread throughout the galaxy, Maosheng and Hans-Walter began the analysis. 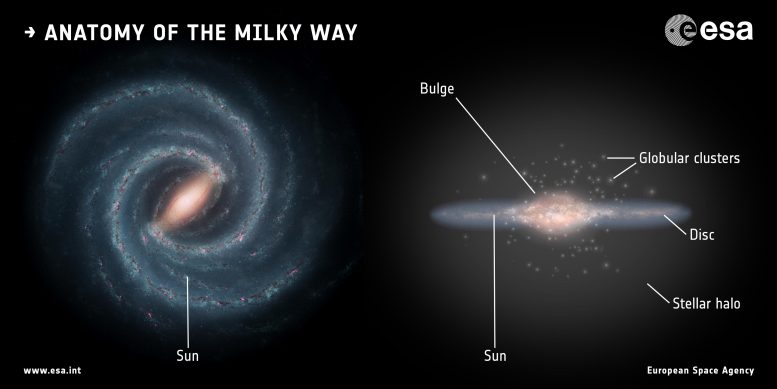 Our galaxy is made of different components. Broadly, these can be split into the halo and the disc. The halo is the spherical region surrounding the disc, and has traditionally been thought to be the oldest component of the galaxy. The disc is composed of two parts: the thin disc and the thick disc. The thin disc contains most of the stars that we see as the misty band of light in the night sky that we call the Milky Way. The thick disc is more than double the height of the thin disc but smaller in radius, containing only a few per cent of the Milky Way’s stars in the solar neighborhood.

By identifying sub giant stars in these different regions, the researchers were able to build a timeline of the Milky Way’s formation – and that’s when they got a surprise.

The stellar ages clearly revealed that the formation of the Milky Way fell into two distinct phases. In the first phase, starting just 0.8 billion years after the Big Bang, the thick disc began forming stars. The inner parts of the halo may also have begun to come together at this stage, but the process rapidly accelerated to completion about two billion years later when a dwarf galaxy known as Gaia-Sausage-Enceladus merged with the Milky Way. It filled the halo with stars and, as clearly revealed by the new work, triggered the nascent thick disc to form the majority of its stars. The thin disc of stars which holds the Sun, was formed during the subsequent, second phase of the galaxy’s formation.

The analysis also shows that after the star-forming burst triggered by the merger with Gaia-Sausage-Enceladus, the thick disc continued to form stars until the gas was used up at around 6 billion years after the Big Bang. During this time, the metallicity of the thick disk grew by more than a factor of 10. But remarkably, the researchers see a very tight stellar age—metallicity relation, which indicates that throughout that period, the gas forming the stars was well-mixed across the whole disk. This implies that the early Milky Way’s disk regions must have been formed from highly turbulent gas that effectively spread the metals far and wide.

Novas notas podem vir em um futuro próximo como[{” attribute=””>James Webb Space Telescope has been optimized to see the earliest Milky Way-like galaxies in the Universe. And on June 13 this year, Gaia will release its full third data release (Gaia DR3). This catalog will include spectra and derived information like ages and metallicity, making studies like Maosheng’s even easier to conduct.

“With each new analysis and data release, Gaia allows us to piece together the history of our galaxy in even more unprecedented detail. With the release of Gaia DR3 in June, astronomers will be able to enrich the story with even more details,” says Timo Prusti, Gaia Project Scientist for ESA.